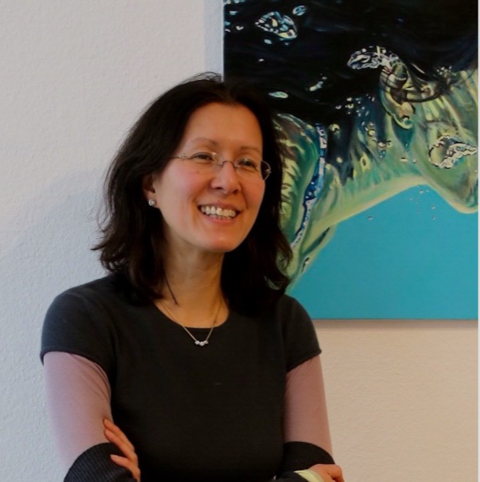 Brigitte Yoshiko Pruchnow is a German-Japanese artist who finds her role models both in Western modern realism and in traditional Asian ink painting.
Upon closer inspection, the first photorealistic impression of light on different surfaces dissolves into purely painterly structures. Shapes and colors appear partially alienated and sharpen the viewer’s perception of the light. Reflecting surfaces, such as water, glass, metal are particularly suitable motifs. She also likes to work with raw linen, modeling clay as a base, fabric applications and embroidery to make different surface structures visually and haptically tangible. The Trompe d’Oeil phenomenon, which has existed as a tradition since Baroque, is of particular interest to them. The background to this, in addition to the play with materiality, are questions about how we perceive and constitute the world. The motif can become anything that invites the artist to take a second look; photographs of it serve as a template for her works.
The fact that the artist originally worked as a filmmaker makes her clear in her perspectives. She often chooses cuts or snapshots of moving subjects.
She studied Japanese Studies, Philosophy and Art History in Munich, as well as directing at the University of Television and Film. Her pictures have been exhibited throughout Europe, but also in galleries and at art fairs in the USA and Japan.